I had originally intended on only writing to 100 words, but then I got into the groove a little despite all the pain running through my arms, legs and back and got to 271 words (not fond of my only child living an ocean away).

I played DDR today for more than an hour. I burned 500 calories on DDR Max and then another 500 on DDR Max 2, though I really struggled on the last 300. I haven’t had any real exercise in more than a month and the entire ordeal took a lot out of me, hence the pain I now feel ringing throughout my entire body.

I had to do something though; I ate an entire dish of mac and cheese on my own and I couldn’t not work out after that.

I’m much too tired to say much else other than that I’m tired and will be spending the rest of the night playing Force Unleashed and then drifting to sleep.

…it would be tonight.

I’m feeling so lethargic that I’m barely in the mood to post. I just want to play the sims and wish that I knew no one else in the world. That way, I wouldn’t have to suffer when bad things happened to the people I loved because there would be no one else.

I wrote 146 words today (Ah! Mr. Eisengardner has returned to us) and I was lucky to get them.

I just…
need a break…
from life.

Writing myself to death Saturday, February 19, 2011

Yesterday, I decided that I would just write a bit since I was home early and then after I’d written “a little,” I would go do other things with the rest of my night. The problem was that “a little” turned into a little bit more and a little more and then, a little more until I had written straight up to 11:55pm.

I had also planned to have a relaxation splurge dinner since I’d done so well on my diet this week, but since I spent the entirety of the evening writing, I never got this dinner and never got ANY dinner yesterday. Needless to say, when I awoke this morning, I was so weak I could barely move. I simply did not have enough energy to propel me out of the bed or to walk. Even when I did manage to get up, I was dizzy and had trouble moving my arms, not out of fatigue, but just weakness.

I’ve said it before: I’ve given up family, friends and, at times, religion, to get this book written and now, it is beginning to take its toll on my health.

I wrote 533 words tonight (make his PC class move any faster.) and I think it’s time that I take my own advice and slow down a bit. What difference does it make if I starting sending the novel two weeks into June or the first week of July? Right now, I don’t even have a goal completion date anymore. I just want it finished since I feel like I’m so close and, while I don’t want to lose my momentum, I don’t want to have to take a super extended break from all writing to get my strength back after months of writing away my life.

This book will get finished and I will make it a piece of art very dear to me. I just need to have a little patience today to be ready for the blessings coming tomorrow.

I can no longer come up with decent titles again.

Well, since I have been writing since I got home this evening, I managed 2516 words (me mad and I just blurted out whatever.”) which should make up a bit of my non-writing yesterday.

I did another sketch. This time I tried to create Ben’s body as well as that of another manga-ish character. It was mediocre at best, but I think if I keep practicing, I may have something worthwhile.

I haven’t got much else to say other than I’m finally at the part when Damen and Brit are getting to know each other. Such fun! 🙂

I’ve been watching a lot of “InuYasha” lately and it has got me thinking alot about drawing and learning Japanese again. Mostly the former; I think the latter is a project best left as a reward after I send Damen off for rejections letters.

My father is an artist and it’s long since irritated me that I haven’t inherited too much of his talent in the visual arts. I have tried to play this off by saying that I am a literary “artist,” but when I struggle to do something as simple as draw a face or eyes, I feel like a total failure.

Anyhoo…early this morning, I was bit by the drawing bug while “InuYasha” was playing in the background and put cheap pencil to paper. I started, like my protagonist, by drawing an eye. I’m not entirely sure whose eye this is since I’ve not moved onto colour yet, but I’d like to call it “Jessie Eye” since it looks really striking.

From “Jessie Eye,” I did some searching on drawing tutorials, etc. and had the strong desire to draw a manga face, particularly Kagome from “InuYasha.” I know I didn’t really capture her and, honestly, there’s no way to tell who it is since most manga/anime characters look identical, so I call this one “Manga Face” for now. 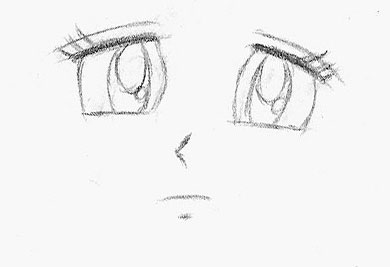 Once the manga bug dug a little deeper in my skin, this sensation to truly create something original arose within me and I decided to recreate my character Ben as a manga character. Ben is one of two main characters in a comic I created called “Little Green Men.” I created it and have been drawing Ben and his counterpart Al, in “Little Green Men” since I was about ten years old and completely enamoured with “The X-Files.” And, so I set to work to make Ben into a manga for “Ben revisited.”

Sometime, somewhere, somehow I’ll find an image of the way Ben originally looked and load these side-by-side for comparison. I have to say, I like Ben as a manga and I think this was part of my main rationale for not progressing with “Little Green Men” as my own little webcomic for fun. I can barely draw as it is, and while the writer in me can come up with some great wit and sarcasm for a comic, my inability to draw anything better than a fourth grader kept my pencil in the cup. Mostly, it seems like I’ve always known how Ben and Al were supposed to look, but I wasn’t sure how I’d draw people or how I wanted them to look, so I kept the whole project hold. Drawing Ben as a manga, however, has ignited a drawing fire in me that hasn’t been lit in…well, almost a decade at this point. The real interesting thing was not only did I recreate Ben as a manga, but I also inked him a little in Photoshop, like a real artist who knew what she was doing! 🙂

Needless to say, I gave up on writing for the rest of the night around 3:30am, but later in the day, I DID manage to write another 128 words in Damen (meanwhile the anthology’s still being well-received), which is a bonus either way.

Edit: My timing on this post was way off; I’m not sure what happened between 11:15 and 4am, but I definitely got lost in the middle on this one…

I had this vision of myself this evening. To put it simply, I was published and happy. Not exceedingly wealthy, but well off to the point that the second job was my only job. The vision faded quickly as did the urge to “completely finish the book tonight!” that it originally brought.

There are nights like tonight, when my head hurts and my stomach hurts and my eyes hurt and I’m just so tired, annoyed, generally irritated that I just can’t write dialogue. I just want to retreat from all human contact to the point that I don’t even want to hear the sounds of the fictional voices as I write them. I just want everyone to shut up for once.

That said, I need to write and I know I need to push through the pain and the fatigue to reach my goal, but it’s night when I’m pushing hardest that it becomes most difficult to write dialogue.

Normally, I love dialogue. The intercourse between two or even three characters can be and feel beautiful once it’s complete, but when I’m just not mentally “there” and I just don’t want to hear anyone, writing dialogue is the most painful process known to literature.

I wrote 396 words (throwing the occasional glance over his shoulder) tonight, which is great considering I wanted to stop at 7 words.

I think I’m just happy that something’s almost over; the night, the book, the diet, the life, whatever.

I finished Chapter 10 just after midnight this morning, not long after I finished the previous days’ post. I also managed to write a total of 3495 words today (I had to say something), which may be a new one-day record on a day when I’ve had to go to first-job. I not only finished Chapter 10, I wrote more than 2000 words into Chapter 11 and am well on my way to doing even more tonight. Somehow, though, I feel even all that still isn’t enough for me.

This evening, I kept trying to find a good stopping place and several times told myself “You can stop. You’ve written more in one than you have in days.” but I could not shake the feeling that I had not written enough; that I could always do more.